TYPES OF PROCESSOR | There are several more types of Intel processors. They are:

Processors created for the purposes of server applications. Intel at this time wants to fulfill a strategy that provides a unique processor for a particular market. 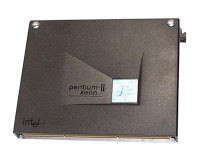 Intel again added server and workstation market with the release of Xeon series but Pentium III type which has 70 SIMD command. The advantage of this processor is, it can speed up processing information from the system to the processor. The processor is also designed to be combined with other similar processors. 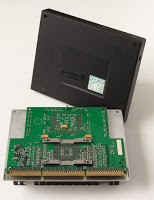 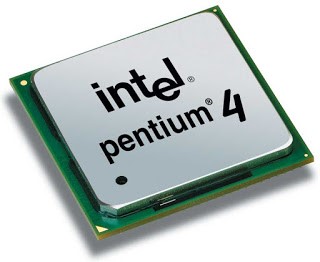 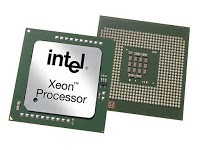 Itanium is the first 64bit processor lined up for users on servers and workstations and specific users. This processor has been built with a completely different structure from the previous one based on Intel’s Explicitly Parallel Instruction Computing (EPIC) recall and technology.

Intel Itanium is the second generation of the Itanium family.

Chipset 855 and Intel PRO / WIRELESS 2100 are components of Intel Centrino. Intel Centrino is made to meet the needs of the market and the existence of a computer that is easy to carry anywhere. 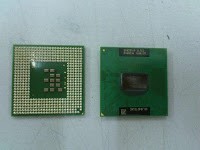 7520 and 7320 can be used for dual processors with 800MHz FSB configuration, DDR2 400 memory and PCI Express peripheral interfaces.

A processor intended for the market of computer users who want something more than their computers, this processor uses 3.73.GHz frequency configuration, 1.066GHz FSB, EM64T, 2MB L2 cache, and HyperThreading. 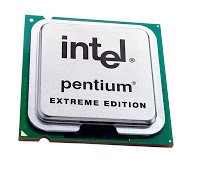 64bit-based processor and called dual core because it uses 2 pieces of core with 1MB L2 cache configuration on each 800GHz FSB core and may operate at 2.8GHz, 3.0GHz and 3.2GHz frequencies. In this type of processor is also included with HyperThreading. 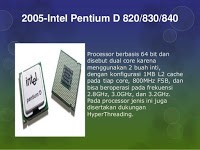 Processor for desktop and used on people who want more power than the computer he has. It has two cores with a 2.4GHz configuration with 8MB L2 cache (up to 4MB accessible for each core), 1.06GHz Front-side bus and thermal design power (TDP). 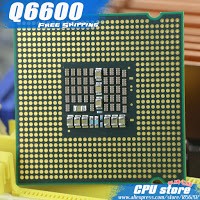 Processor used for server type and has two cores with each configuration 2.13GHz and 2.4GHz respectively with 8MB L2 cache (can reach 4MB accessible for each core) 1.06GHz Front side bus, and thermal design power ( TDP).